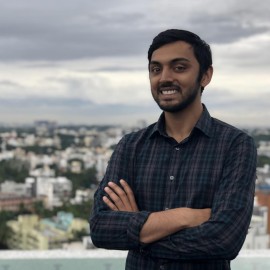 I am a PhD student studying computational neuroscience at Stanford, advised by Dr. Justin Gardner. My research focuses on understanding human visual perception - specifically, I’m interested in how the human brain transforms sensory inputs into the rich perceptual experience that we use to guide our behavior.

We seek to answer these questions using a combination of functional neuroimaging, visual psychophysics, and computational modeling.

Previously, I was an undergraduate at UC Berkeley, where I worked in the lab of Prof. Mark D’Esposito. From 2015 to 2016, I was a visiting researcher in the lab of Dr. Martin Rolfs at Humboldt Universitat / BCCN Berlin.

In addition to research, I am also passionate about teaching and have designed, taught, and assisted in several courses at UC Berkeley and Stanford at the graduate and undergraduate levels on topics ranging from computer vision to cognitive neuroscience to the science of meditation.

I have served as a graduate student instructor for the following courses at Stanford University:

In addition, I teach AI to high school students, through the Inspirit AI institute.